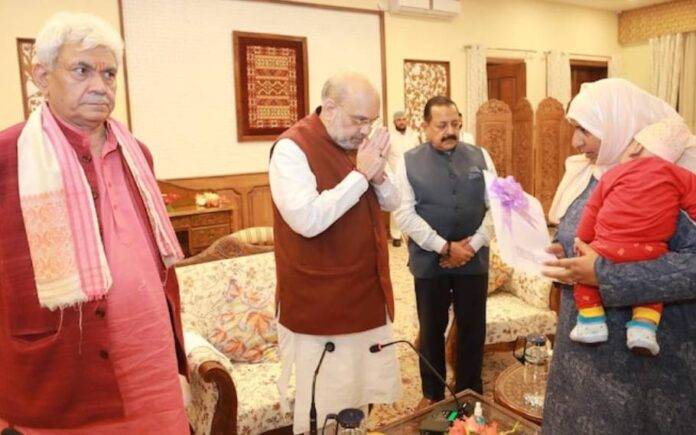 Amit Shah handed over appointment letters on October 4 to the family of four Jammu and Kashmir Police personnel who were killed in terror-related violence in the valley.

“The families of four JKP martyrs were given job letters by the home minister at the Raj Bhavan here,” an official stated. The Home Minister shared photos on microblogging site Twitter of his meeting with the relatives of the police personnel killed by terrorists in the Kashmir valley.

Amit Shah said in a tweet in Hindi, “Met the family members of the Jammu and Kashmir Police personnel who were killed while fighting against terrorists and handed over appointment letters to the family of four such martyrs.”

The families of 24 people killed by terrorists have received appointment letters from the Home Minister. It is noted that during his first visit to Jammu and Kashmir after the abrogation of Article 370 of the Constitution, Amit Shah met the family members of Inspector Parvaiz Ahmad in Nowgam.

Parvaiz Ahmad was also killed by terrorists. The Home Minister had handed over the appointment letter for a government job to the late Inspector’s family.