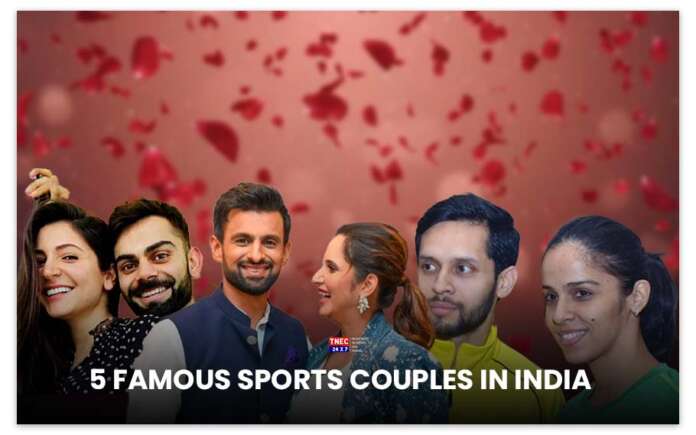 But as we all know a sports person first love is always his sports. And his life involves a lot of travel and training. But amongst his busy schedule we always get to see bits and bytes from their love life.

The entire nation was mesmerised when Virat and Anushka tied their knot also every video of Dhoni and Sakshi instantly starts making rounds in the internet.

With that let’s take a peek into the lives of some famous Indian sports couples:

The once controversial Indo-Pak love story of Sania Mirza and Shoaib Malik.

Their decision to get married after few months of dating was not much appreciated and supported. The couple first met during a bad phase of their professional lives.

Sania during that phase was suffering from several injuries and Shoaib too was struggling in his career. Being famous athletes in their respective places, their patriotism was questioned.

However, it has been years of their marriage and they now have a son named Izhaan Mirza-Malik.

The had to hide their relationship as they belonged from different communities. Saina was from Haryana and Parupalli was from Hyderabad.

However, the duo finally got married in 2018.

Love story of the adorable couple Anushka Sharma and Virat Kohli was quite a hype.

Anushka Sharma and Virat Kohli first met on the sets of a TV commercial shoot. They too kept their relationship off guard for quite a long time.

The duo made their first public appearance together in November 2014. They were first spotted together at an Indian Super League football game in Pune.

However, on 2017 they got married. Recently, they both were blessed with a baby girl.

India’s ‘Flying Sikh’, Milkha Singh is married to the love of his life Nirmal Kaur.

Milkha Singh and former volleyball player Nirmal Kaur have been married for more than 50 years.

Known as the Flying Sikh, Milkha Singh is a sporting icon and Nirmal Kaur was a former captain of the Indian women’s volleyball team.

They both met in Sri Lanka in 1957 and in 1962, they got married. They have been blessed with three daughters and a son. India’s Golf Sensation, Jeev Milkha Singh is their son.

The forever adorable couple Mahendra Singh Dhoni and Sakshi Singh Dhoni are quite often seen on social media platforms with their lovely videos.

They both were childhood friends but under some circumstances had lost contact for some years. However, the duo met again after around 10 years in Kolkata.

The meeting happened as Team India had to stay in Taj Bengal, Kolkata where Sakshi, who was a hotel management student, was an intern.

When introduced to Dhoni, he instantly fell in love with Sakshi. They couple tied their knot on 4th July, 2010 in Dehradun. And now they are blessed with a baby girl named Ziva Dhoni. Ziva was born on February 6, 2015.

These were the stories of few sports couples in India. And their stories never fail to mesmerize us. They all have a fairytale element in their stories which made us fall in love.