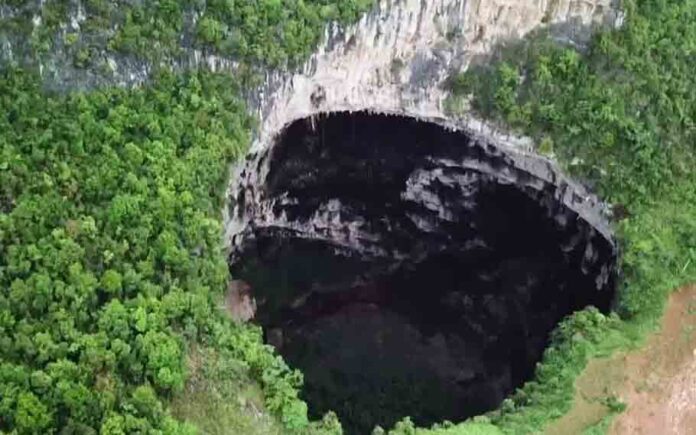 Researchers uncovered a spectacular ancient forest range with trees as tall as 131ft (40m) in a large 630ft-deep sinkhole in China, which could feature species that have never been seen before.

The find was deemed “significant,” and specialists traveled for several hours before reaching the sinkhole’s base, where they discovered three cave entrances.

According to experts cited by the news agency, the dolines’ bottom is ringed with a “well-preserved primitive forest” with trees sprouting up towards the sun.

The dense undergrowth on the sinkhole floor was as high as a person’s shoulders, according to Chen Lixin, who led the cave exploration team. Some of the ancient trees at the bottom were 131ft (40m) tall.

Mr. Lixin said, “I wouldn’t be shocked if there are species found in these caverns that have never been identified or characterized by science before.”

The magnificent and occasionally dramatic karst formations in China’s Guangxi area are well-known.

There are numerous sinkholes in Leye County, where this particular sinkhole was discovered. According to Xinhua, this latest swallow hole brings the total number of swallow holes in this county to 30.

According to George Veni, executive director of the National Cave and Karst Research Institute (NCKRI) in the United States, karst landscapes are predominantly generated by bedrock dissolving.

“The way karst appears at the surface can be significantly different because of local variances in geology, climate, and other things,” he said.

“So you have this extremely aesthetically amazing karst in China with big swallow holes and giant cave entrances and so on,” he continued.

“In other parts of the world you walk out on the karst and you really don’t notice anything. Sinkholes might be quite subdued, only a meter or two in diameter. Cave entrances might be very small, so you have to squeeze your way into them.”

Also Read: RESEARCHERS REVIVE THE EYES OF A DEAD PERSON FOR THE 1ST TIME