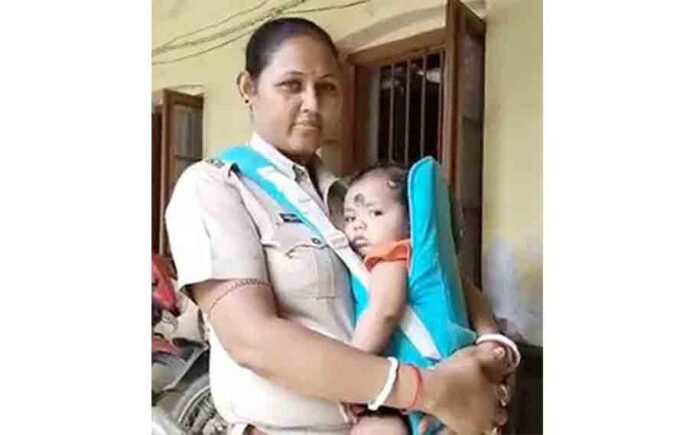 A woman police constable in Assam has won praise, after being seen carrying her seven-month-old infant to work.

Sachita Rani Roy, assigned to the Cachar district’s Silchar PI Court, was seen heading into her office with her kid in a carrier.

Moreover, Ms. Roy, now that her maternity leave is ended, arrives at work with her infant at 10:30 a.m. every day and stays till the day’s job is completed.

Meanwhile, her request for leave was denied, therefore she was compelled to bring her infant with her. The 27-year-old further stated that there is no one at home to look after the child.

“I don’t have anyone at home to look after my kid, so I’m forced to bring her with me.” “It’s uncomfortable at times, but I don’t have any other choice,” Ms. Roy explained.

Furthermore, Ms. Roy’s spouse is a jawan in the Central Reserve Police Force (CRPF) stationed outside of Assam.

Ms. Roy, a resident of Silchar’s Malugram neighborhood, expressed her gratitude to her coworkers and the police department for being so helpful.

“I leave a little early since it’s tough for the infant to stay with me all day,” she explained with a smile.

However, Ms. Roy has received praise from all sides for her dedication to her responsibilities.

“I have requested for more leave,” she explained, “but until it is allowed, I shall continue my duty in this manner.”

Also Read: Cancer vanishes in all patients in US during drug trial, 2022