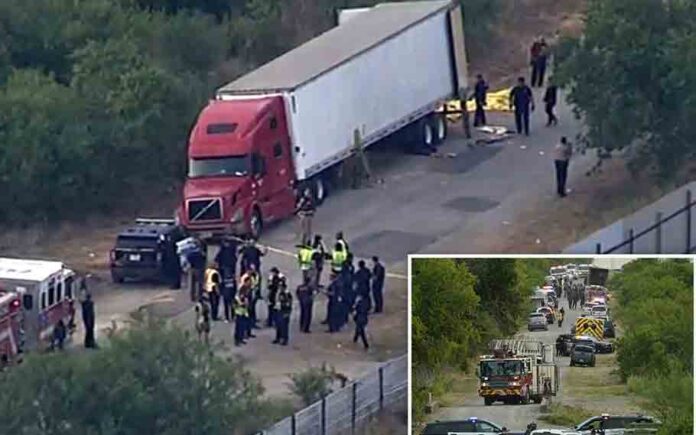 On Monday, 46 migrants were discovered dead inside a tractor-trailer in San Antonio, according to law enforcement officials. Moreover, sixteen other patients, 12 adults, and four kids were transported to nearby hospitals with heat-related injuries

At a press conference, Police Chief William McManus stated that at around 5:50 p.m. local time, a worker called the police after hearing calls for help and seeing the trailer’s doors partially open. According to McManus, the worker discovered several deceased people inside the trailer.

McManus said three people were in custody, although McManus pointed out that officials are unsure of their connection to the incident. Federal investigators are presently looking into the incident.

The 16 migrants were conscious when they were discovered

Meanwhile, the 16 migrants who were sent to the hospital, according to San Antonio Fire Chief Charles Hood, all the migrants were conscious when they were discovered, despite the fact that they were “weak” and unable to exit the trailer on their own. All were “hot to the touch,” according to him, and were afflicted with heat-related illnesses like heat exhaustion and heat stroke.

He claimed that the truck showed no traces of water or a functioning air conditioner. According to the officials, it is unclear how long the group stayed inside the vehicle before it was discovered.

The migrants were a mix of men and women and varied in age, but none of the deceased appeared to be minors, officials said.

Migrants seeking asylum should always be treated as a humanitarian crisis, but this evening we're facing a horrific human tragedy.

More than 40 hopeful lives were lost. I urge you to think compassionately, pray for the deceased, the ailing, and their families at this moment.

According to law enforcement authorities who spoke to CBS News, Homeland Security Investigations is in charge of the investigation into the alleged human trafficking incident and will collaborate with the San Antonio Police Department.