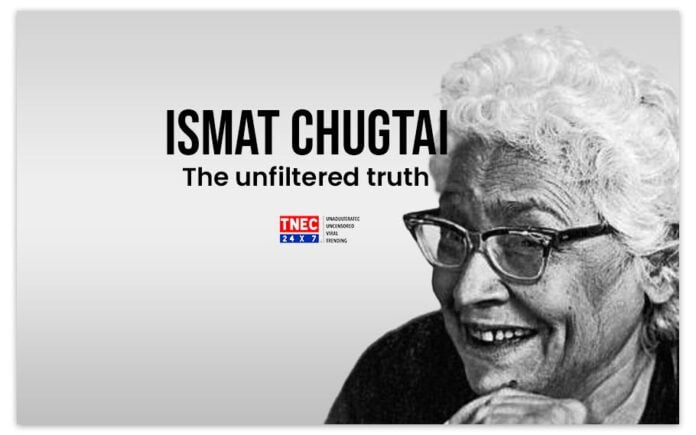 Being bold doesn’t necessarily mean that one has to wear short clothes, rather bring bold holds much more than that.

When a woman bangs the road ahead of her boundaries and aims to speak up irrespective of all the subjects of relevance that has been taught to her since birth, the society perceives it as being against culture and ethics.

Ismat Chugtai, a name that was renowned for its audacity of unveiling things which no one else would have spoken of, a personality that in itself was a midas of boldness and a figure that lived way ahead of her time.

Born on August 21, August 21, 1911 in Badaun, Uttar Pradesh Ismat Chugtai was one of the most celebrated Urdu authors of her time.

One of the most persistent work of Ismat Chugtai stands to be the short story, Lihaaf (The Quilt) that appeared in Adab-i-Latif, a literary magazine based in Lahore.

The story which was apprised by the perspective of a young girl talks about depraved sexuality and uncontrollable sexual desires of a women.

‘Quilt’ is one of the most popular short stories of the great dame of Urdu literature, Ismat Chughtai. Chughtai gave birth to a new form of revolutionary feminist politics in Urdu literature.

The story depicts every aspect of situations from lesbian sexuality to the hypocrisy of arranged marriages in India, from boy prostitutes to orgasms in women, from the sexism of society with regards to manly women to the abuse of children in the confines of domesticity.

Ismat Chugtai in her story narrates the experience of a little girl (Chugtai herself), that evokes a terrifying memory in her mind when in her childhood her mother went away for a week, leaving the narrator with the mother’s adopted sister, Begum Jaan.

The story continues how  Begum Jaan has an arranged marriage to Nawab Sahib, a Muslim nobleman whom the public considers virtuous because no one ever sees dancers and prostitutes visiting his house. However, the nawab keeps an open house for young male students to live with him while he pays their expenses.

It was because of the homosexuality of the Nawab he ignores his wife’s sexual needs and sequesters her to a section of the house. She tries in vain to seduce him, but eventually, after finding her life force wasting away, Begum Jaan is brought back to life by Rabbu, her hired masseuse.

Rabbu massages Begum Jaan constantly. She is beside her at all times and even sleeps next to her. There came a time when the maids in the household gossiped about Begum Jaan’s dependence on Rabbu, but Begum Jaan’s obsession with her is something else.

Her story on Lihaaf got her into massive controversy which initially led her to judicial custody.

However, Ismat Chugtai won the case in court. Her lawyer pointed out that the text made no explicit suggestion to any sexual act or lesbianism, and neither did it mention any profane language.

Nevertheless, Lihaaf is considered to contain one of the most beautifully woven homoerotic subtexts in Indian literature. In its premise, the story doesn’t attempt to be overtly virtuosic—it isn’t a flagbearer for womanhood or feminism, and it doesn’t attempt to contextualise lesbianism. Instead, it simply delves into desire and longing, with familiarity yet wonder.

It is to be noted that much of her writings deal with women’s lives within middle class society and their concerns. Some critics do accuse Chughtai of being unidimensional. But then that was what she was best at. She had a keen eye for detail, and had an intuitive understanding of the concerns of women in the smaller town of Uttar Pradesh. Her writing is marked by understanding and compassion for these women.

It was in 1971, when she was awarded the Padma Shri for her contribution to Urdu literature.