Farmer’s Suicide: Tragic side of the Agrarian backbone of India 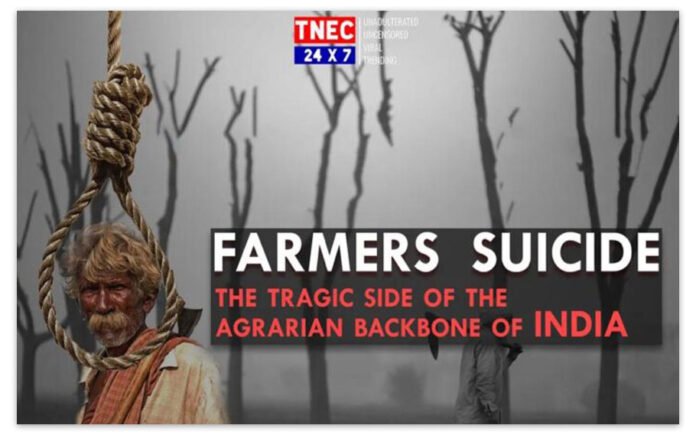 Whenever we talk about farmer’s suicide we must understand that India is an agricultural country, with about 70% of the inhabitants relying on agriculture for a living, either directly or indirectly. India’s agriculture industry accounts for more than 15% of the country’s GDP.

The country’s economic development will be feasible only if the farmer’s community is given utmost attention. Agriculture has long been practised in India, and it is known as the “backbone” of the country.

Farmers feed the country, but their working conditions are far from ideal. One of the most significant calamities to strike our country in recent decades has been the agricultural crisis.

In India, almost 2,00,000 farmers have committed suicides in the last 25 years, the highest number of suicides in recorded history.

Human rights organisations, such as the United Nations Human Rights Council, national and state human rights commissions, and Indian constitutional courts, which are attempting to hold the government accountable for the crisis, regard the fatalities resulting from systemic issues.

What leads to Farmer’s Suicide?

These systemic issues include various societal, economic, political and personal difficulties, which is the critical factor in driving the farmers to end their lives. It is well known that agriculture in India is referred to as a “monsoon gamble,” implying that it is overly reliant on nature, and once the monsoons fail, crops collapse.

Even irrigation facilities are not well developed in India. As a result, farmers are forced to take out large debts to cultivate crops, and many of them commit suicide due to their incapacity to repay the loans, which are usually taken out from landlords and banks.

Farmers also face too much family pressure, and as a result, they fail to make ends meet and commit suicides due to their failure. This failure to contain the crisis is primarily due to the government’s and human rights institutions’ incapacity to comprehend the issue’s root causes.

Farmer suicides are caused mainly by indebtedness or bankruptcy. Farmers’ indebtedness is one of the primary factors motivating them to commit suicide. The issue begins with the availability of timely credit. To prevent risk, the banking industry is unwilling to give credit or loans to farmers. As a result, the link between these institutions and farmers must be investigated.

Crop failure, family emergencies, or a failure to realise enough money from generating produce can cause a farmer to default on the loan. These conditions alone can jeopardise the community’s survival. When penalties resulting from banks’ recovery practices are coupled to these factors, farmers are pushed over the brink. The overall suicide rate due to bankruptcy is about 3%, but it is close to 40% in the case of farmers. This paradox is explained by the recovery procedures used by financial organisations.

According to the National Crime Records Bureau of India‘s 2012 annual report, 135,445 individuals in India committed suicide, with 13,445 farmers being farmers. In India, farmer suicides account for 11.2% of all suicides.
Between 1997 and 2005, one farmer committed suicide every 32 minutes in India. Of these, 10,486 farmers committed suicide in five of the 29 states.

Between 2011 and 2013, Maharashtra was by far the epicentre of the issue, with over 10,000 farmer suicides documented. Small and medium farmers account for about 75 per cent of all farmer suicides. Ninety-three per cent of farmers committed suicide as a result of their indebtedness.

Farmers are among the country’s most prudent borrowers. Their default rate, which is only 8%, is substantially lower than the industry’s default average of 21%. Financial institutions, on the other hand, get away with abusing people’s human rights.

It is sometimes stated that banks are obliged to use such tactics since the legal attachment of their property is ineffective. The ineffectiveness of the Indian court system in seizing defaulters’ property on either side cannot be used by banks as a pretext to violate farmers’ human rights.

The government’s approach to the farmer’s suicide issue has been overly simple, and in some cases, exacerbating. The primary issue with giving “special packages” to address such a problem is that it is reactive rather than proactive in the long run. This is a painful condition of circumstances that exist in the country.

The government must give appropriate institutional financial assistance to farmers, as well as a sound crop insurance system in the event of crop failure and natural relief to the afflicted farmers since it is true that with every farmer who commits suicide, the country takes a step backwards.

Also read: The Farmers Protest: Why it started and its current state?