5 forgotten Dalit, Bahujan and Adivasi Women who wrote the history of India 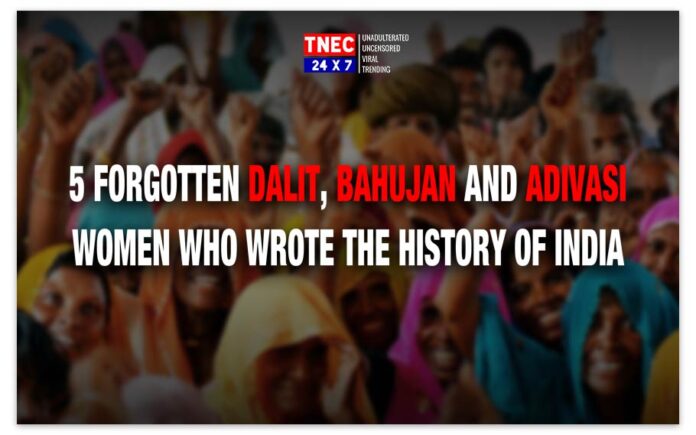 By: Sneha Singha, The North-Eastern Chronicle

Women’s grit and determination in the face of adversity, their courage to face death, and their intense love and love for their motherland all serve the same purpose – to stoke our imaginations and inspire us to strive for a better world, but these women leaders have long since passed away and have been forgotten. In wanting to see their country free and develop, they made selfless sacrifices, even laying down their lives.

While resisting colonial oppression, women from Dalit, Adivasi, and Bahujan backgrounds also had to confront local and regional marginalisation caused by brahmins and upper caste groupings. Our history texts fail to mention their resistance due to historiographic obscurity.

Some Dalit, Bahujan, and Adivasi women who have contributed to the Nationalist movement against imperial exploitation are listed below:

Tamil Nadu’s Queen Velu Nachiyar was a brave warrior who fought tyrants long before Lakshmi Bai. Around the year 1780, the Queen was one of the first monarchs to fight against British rule, and it was during that war that Kuyili gave her life to rescue her homeland of Shivagangai.

Her admirers called her “Veerthalapathy” (The Brave Commander) or “Veeramangai” (The Brave Woman) because she was born into a lower caste Arunthathiyar family. Kuyili’s father, who served as a spy for the Queen, assisted her in becoming acquainted with the rules of the day and becoming a companion to Velu Nachiyar in her early years. She was employed as the Queen’s bodyguard and eventually the Commander-in-Chief of the women’s army, and she saved the Queen’s life several times.

She bravely led her soldiers into the Sivagangai Fort to assault their oppressors, deceiving British officials by concealing their weapons. The British army was unprepared for this onslaught, and Kuyili became successful in carrying out her intentions to destroy the Britishers’ weapons. She set herself on fire and self-sacrificed her life while drenched in oil. Her bravery as a lower caste woman facing injustice and adversity is still remembered today.

Jhalkaribai was a Dalit fighter from the Kori caste who played a key role in what is considered as the first struggle of independence—the Revolt of 1857 against the colonial government—and was one of Rani Laxmibai’s most loyal companions and counsellors.

Jhalkaribai was unable to get a formal education since she was a member of an oppressed caste and lived in poverty. She did, however, learn a few other abilities, including firearms and horseback riding. From a young age, several folklores have circulated about her abilities to battle dacoits and wild animals in her native hamlet.

Jhansi ki Rani was impressed by her abilities and admitted her into the army’s women’s wing, where Jhalkaribai was trained to shoot and ignite cannons in order to fight the wars against British control. Jhalkari disguised herself as Rani Laxmibai and gained command of the army on the battlefield during the Rebellion, owing to their striking similarity.

She did not regret her decision, even after becoming fully aware of the dangers of war, and walked right up to the opposition’s camp. Her death, on the other hand, remains a mystery, with many theories circulating.

Uda Devi, a Dalit freedom fighter, and her brave Dalit sisters, known as Veeranginis (warriors), battled valiantly against the British authority during the 1857 Revolt against the British East India Company, which was infamous for plundering local resources. Begum Hazrat Mahal was approached by her to recruit her as a warrior and assist her in building a women’s battalion under her command.

Her involvement is even more noteworthy because, contrary to popular belief, women from lower and downtrodden castes played equal or even more important roles in challenging British control during the Revolt of 1857, which was led by the royals and nobility.

People from the Pasi caste remember her as a feisty and heroic Dalit lady who resisted both caste and gender hierarchies imposed by the brahminical and patriarchal culture every November 16 to commemorate her sacrifices to India’s independence against the colonial administration.

Rani Gaidinliu, called “Rani of the Nagas” by Jawaharlal Nehru, eluded the Britishers at the age of 16 until being apprehended and condemned to life in jail, which she served only after India’s independence.

She was a member of the Rongmei Tribe, which was part of the Zeliangrong Tribe, and despite her lack of formal education, she rose to prominence as a leader thanks to the influence of her cousin, Haripao Jadonang, who had organised the Heraka socio-religious and political movement to oppose British rule.

She rallied the Zeliangrong tribe to refuse to pay taxes to the colonial government. Gaidinliu was successful in her mission, leading these people out of imperial subjugation by refusing to aid the British in any way and assisting them in evading British forces from village to village across the states of modern-day Assam, Manipur, and Nagaland.

The special Assam Rifles contingent was prompted to arrest her quickly due to rising concerns about her anti-British sentiments. She was later apprehended by the British, handcuffed, and marched to Kohima.

Her associates were either imprisoned or executed as a result of her actions. She was finally allowed to go when India gained independence. She then continued to fight for the welfare of India’s backward tribes after spending several years in prison.

Putalimaya Devi Poddar, a Gorkha lady was known in her community for defying both the imperial and social orders. She was only 14-15 years old when she decided to join the Congress Party in order to help in the fight for independence from the British. Despite her father’s continuous discouragement, the immensely patriotic Putalimaya was eventually able to realise her aspiration of joining a freedom fighter when Kurseong created an office for the Congress Committee in 1936.

Her struggle and activism, however, did not end there. She also established a Harijan Samaj in Kurseong to encourage Dalits and Shudras to get interested in and receive an education. She also formed a women’s organisation that encouraged young women to become patriotic community leaders and to use nationalist feelings to oppose colonial rule.

Poddar was constantly warned by British officials or summoned to the police station during this time. This did not stop her from organising and leading the independence struggle in Kurseong and the surrounding villages of Darjeeling and Kalimpong.

At the same time that a call for Swaraj was raised in Bombay on August 8, 1942, which led to the arrest of important nationalist leaders, Kurseong organised a large Jan Sabha a few days later, which led to her arrest by British police officials.

Putalimaya Devi continued her activism as a Samaj Sevika even after India’s independence. The then-Government of India gave her the names “Swatantrata Senani” and “Tamra Patra.” As President of the Kurseong Mahukuma Congress Committee and Vice-President of the Darjeeling Zilla Committee, she was referred to as “mataji” by the general public. On December 1, 1984, she passed away.

Also Read: Malala Yousafzai: A Revolution in herself!