Secret of North-East India, A must Explore! 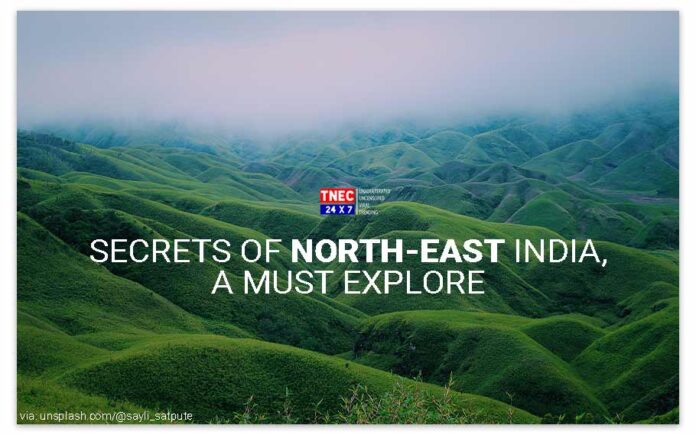 This region represents the geographic as well as political administrative division of the country. The Northeast India is filled with thrilling and authentic view. And, moreover the obscured land has myriad hidden treasures, about which only the locales and the hardy travellers are well aware of.

Some of the regions are still unexplored, and many of them are highly concealed with formidable mountains and forests nearly impenetrable.

Nowadays, even though one won’t witness a head hunter, but if one wants to know more about the culture and history of the head hunters, then they must make a visit to the state of Nagaland.

Even if the Naga headhunting stopped back in 1940s, but one can still spot many elders of the Konyak tribe with tattooed faces, meaning they’re from the headhunting clans. The killing and severing an enemy’s head was considered a rite of passage for young boys and this triumph was rewarded with a prestigious facial tattoo.

The village Mawlynmong, located around 100 km from Shillong is the cleanest village in Asia. Not many of us know about this village.

The best part but rarely mentioned fact about this village is that it has 95 families staying in it and have a literacy rate of 100%. This is the most shining village in the North East of India, which is a competition to any other villages in India.

Gambling is legal in a state of Northeast

Sikkim after Daman and Goa is another or rather the only state in India which has made gambling a legal affair. Casinos are constructed right on the hotel or resort premises with the proper permission of the government. So next time if anyone visits to the state, they can try their luck on any of these casinos.

Mother’s Market in the capital of Manipur

The Mother’s Market in Imphal, Manipur which has women as vendors are making a successful business for nearly over 100 years now. “Ima” signifies mother and “keithel” signifies market.

Over 3500 women sell foods, clothes, utensils and a large number of handicrafts in the community here in Manipur. This is a women-centric market very rarely seen in the modern world.

Jonbeel Mela is an annual fair held in the Morigaon district of Assam hosted by the Gobha and Ahom kings. The fair dates back to 15th century when the kings organised the fair to discuss the prevailing political situations.

The main attraction of the fair currently is the barter system that takes place among the tribes, tourists and general people coming here.

The Khasi tribe of Meghalaya is one of the few societies in the world that follows a matrilineal system. Women are head of the household and the one who does the hard labour to earn a living for the family.

Men takes the back seat here. When a girl is born there are cheers of jubilation and when a boy is born, they accept it humbly as a gift of God.

Unakoti, a place in Tripura

Unakoti is a place in Tripura where hundreds of huge rock-cut sculptures of Lord Shiva lie unexplored. It is believed that the sculptures are lying there since 8-9th centuries. Legends say that Lord Shiva stopped at this place while going to Kashi. Since his companions did not wake up before sunrise, he crushed them into these stones and continued towards his destination.

Its major attractions include the 33ft high bust and 11ft high headgear of Lord Shiva. 180 km from Agartala and 8km from Kailasahwar town, the nearest airport is Agartala, from where you can take a cab or bus to Unakoti. Kumarghat is the nearest railway station, from where you can reach Unakoti by road. Helicopter service is also available from Agartala and Kailasahwar.

‘Chong Kedam’ is an Assamese martial dance that was traditionally performed by adolescent or unmarried males of the Karbi community armed with swords (nok) and shields (chong).

The Karbi people are believed to have migrated to present-day Karbi Anglong in central Assam, the state’s largest district, from western China along the course of the Brahmaputra and Irrawady rivers. The Chong Kedam martial dance narrates the story with complete vigor. In olden days, shields were made from the hide of rhinoceros.

But, today they recreate them using other metals due to their endangered status. So, dancer’s men, as well as women, use aluminum and steel variations as they clearly understand the value of Mother Nature.

Northeastern states in India are a unique mix of culture, majestic creations from Mother Nature and inspiring and quirky values. All these states of the Northeast are not only closely knit with one another but also there is an inter-cultural connection which people have developed and maintain here.

Also Read: Bored At Home? Why Not Check Out These Youtubers from Northeast India to travel, have fun all sitting at home