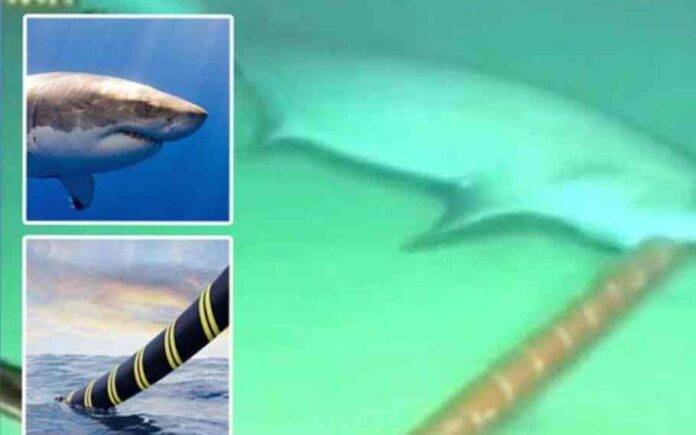 Did you know sharks love Internet cables? Defined as a fish with a rubbery skeleton and a sleek, streamlined body, a shark can range in size from the two foot pygmy shark, to the colossal 50-foot whale shark. Agitated by most, adored by some and hunted by many, sharks are one of the most mysterious groups of creatures roaming under the water surface of Earth today.

Have you heard that sharks love Internet Cables

Sharks are found in almost every major body of saltwater in the world, but are more common in warmer waters. Now, have you ever come across the fact that this creature loves the taste of the Internet?

According to a report by The New York Times in 1987, sharks “have shown an inexplicable taste for the new fibre-optic cables that are being strung along the ocean floor linking the United States, Europe, and Japan.”

Again, according to Network World’s Brandon Butler, a Google product manager explained at a recent event that the company has taken to wrapping its trans-Pacific underwater cables in Kevlar to guard against shark bites.

The fact was confirmed on Google that its newest generation of undersea cables comes wrapped in special protective yarn and steel wire armor, and that the goal is to protect against cable cuts, including possible shark attacks. However, it is still not confirmed.

A sneak peak into Google’s own handy website reveals that the company actually holds a patent of its own for a material called “polyethylene protective yarn.”

Why is polyethylene protective yarn used for? How does it prove that sharks love internet cables?

High strength polyethylene yarns useful in ballistic-resistant, cut-resistant and other applications, fabrics produced from these yarns and the methods by which the yarns,and fabrics are made. An untwisted yarn of the invention comprises a plurality of filaments in essentially parallel array and from about 0.5 to 5 weight percent of a water-dispersible binder material covering less than half the surfaces of the filaments.

Google would be investing in better ways to protect their transoceanic data cables. Over the passing years there have been several instances in which damage to undersea lines resulted in widespread disruptions of Internet service and this is doubted to be a consequence of shark attack. Dependable network infrastructure has become increasingly essential to Google’s business, which relies on ultra-fast transmissions of information between its data centers around the world.

In August, 2014 infrastructure czar Urs Holzle announced that the company is helping to build a new trans-Pacific cable system connecting the United States to Japan at speeds of up to 60 Tbps.

But why would sharks love internet cables?

Several researchers and investigations have pointed out that sharks can sense electromagnetic fields, so perhaps they’re attracted by the current.

The problem of sharks attacking undersea data cables traces back to 1980. As studied the cables are more prone to confront shark attacks as they are equipped with hydrophones that receive the returned signals initiated from a seismic source, these streamer cables are deployed at about 16 – 65 feet (5–20 meters) deep, and each streamer is typically 26,247 ft (8 km) long.

Thus, activity probably attracts numerous animals to check out what the ruckus is all about. One of these animals are sharks, who are attracted to the magnetic streamer fields and tend to bite through the cables! In some areas of the world, equipment loss due to shark attacks on streamer cables is a serious problem in terms of time delays and economic loss for the operator.

Moreover, many investigations have revealed a widely distributed shark in tropical and warm temperate waters worldwide which are common in areas where oil companies have encountered problems with sharks attacking the streamer cables. The International Union for Conservation of Nature has assessed bull sharks as Near Threatened (NT) because their occurrences in estuarine and freshwater areas makes them vulnerable to human impacts.