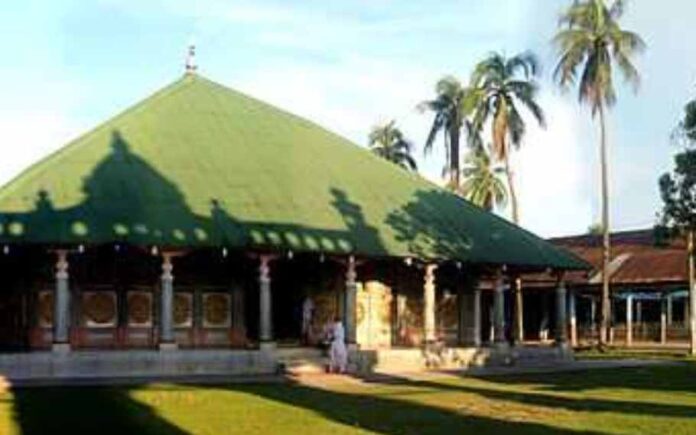 Barpeta Satra is a renowned satra situated at Barpeta. It was established by the great vaishnavite saint Madhabdev in 1505 shakabda (1583 AD). The initial name of the satra was Barpeta Than.

Sir Mathuradas Ata (1490-1596 AD), a Chandala by origin, took care of the Satra and he became the first Satradhikar of Barpeta Satra when Madhabdeva left the Satra and gave the responsibility to his disciple. The administration of the Satra leading to the development of the institution and the region of Barpeta was systematized by the Burhan Ata. The democratic system which was introduced by him which is effective till this date.

Barpeta Satra premises start with three Batchara (Entry Gate of Areas), whereas the Main complex is surrounded by walls, they are (i) Nahati Batchara (westside entry) (ii) Uttar Hati Batchara (North Entry) and (iii) Dakshinhati Batchara (Entry from South), there is no entry from East side because a canal (Hari Jaan) flows along the east side.
As with Batchara, there are three entry gates to enter the main complex, i.e. Uttar Dwaar (north gate), Dakshin Dwaar (south gate) and Dalan (on the west side). Dalan is considered the main entry.

Kirtan Ghar (main prayer hall): Kirtan Ghar is situated in the almost centre of the Sarta complex. The main entrance is in the west, and Bhaj Ghar is in the east. Near to main west gate, there are two wooden pillars (traditionally known as Tulasi Kuta) making that support the main building. There are Guru Asians, which are followed by two big Ghacha (stand) kept by Akshay Banti (lamp). There are two Chairs behind the Guru Ashana (east corner) namely for Burha Satriya and Deka Satria, where they do their day-to-day activities. There are three Guru Asians in the Kirtan Ghar, it is believed that these Guru Ashan are associated with the name of Sri Sankar Dev, Madhab Dev and Padma Ata.

According to the general faith, these three Guru Ashan are dedicated to Lord Krishna in a composite form. There are seven Bar Sarais (great sarais) who are kept in a line before the Guru Ashan. One Chaki/Pradip are lit in front of each Bar Sarai. There is no statute of any God or Goddess inside the Kirtan Ghar.

This is known as Monikut, valuable ornaments of gold and silver are kept in this area. Some representative statues are also kept here. The Bhaj Ghar is established on the east side of Kirtan Gharn in the north-south position. The architectural style of the Bhaj Ghar is unique.

The pat change also carries a special architectural style. The pat chang is made of wood and tin. It is constructed parallel to the Bhaj Ghar. The floor of the pat chang is 5 feet (1.5 m) above the ground. Some special meetings are held here. Religious and administrative issues of satra are discussed here. It is honoured as pure as the pat chang of king Kongsha.

Khatkhati Ghat: There is a canal running to the east side of the Barpeta Satra. The bank of the canal which touches the Barpeta Satra complex in the east is known as Khatkhati (the canal, later on, blocked two sides and converted to a pool and named Madhab Sarover, but it now again runs as a canal). Shree Madhab Deva, the great disciple of Srimanta Sankar Deva used to bathe along with other bhaktas in this canal. All the steps (khatkhati) were constructed with stone. There are statues of child Krishna constructed in between the water of the Jaan (canal).

The math available in the Barpeta Satra is similar to the architectural style of the Ahom king. Some precious Sankar–Madhab memorabilia are kept in the math i.e. a piece of stone (used by Sankar and Madhab to wash their feet ), the script of Sankar Dev’s Dasham and Madhab Dev’s Namghosa, Bhakti Ratnavali and two “Negeri” currency, which was given to Madhura Das by Madhab Dev as remuneration.

The house (Bhiti) of Sri Ram Ata was established opposite the house of Madhab Dev. Nowadays one well is constructed here, the water of this well is assumed as pure and water from this well is used in all the works of the Satra.

In the north-east position of the Satra there is a small but beautiful house constructed on the place where the 1st Satria of Barpeta Satra Mathura das Burha Ata lived.

It is an open (without wall) L-shaped house, it is used as a prayer house, every day in the morning and evening time people come to listen to the Bhagawat. In the time of Doul or holi, the Bhagwat house is used as a temporary medical house.

SabhaGhar is also an open house in the northwest position of the Kirtan Ghar in the Barpeta Satra. General meetings of the Community are held here. There is a small house on the north side of the Sabha Ghar which is known as Jagamohan Ghriha.

There is a unique design 7th stairs building in the North-West corner (near to North entry gate), which is mainly for keeping the Kalia Thakur at the time of Doul (Holi Festival).
Previously people may perform art openly, but later on it is covered-up with boundaries and performed on the stage. Ranga Mancha is a modern stage for performing Arts and cultural activities from time to time.